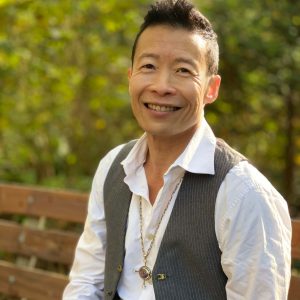 Born into 1968 Singapore and a fundamentalist Christian family, Tien Neo Eamas was given the gender marker female. For years he internalised his experience of family violence, sexism, homophobia, racism, and trans- and gender-phobia. Eventually falling into a major depression, Tien thought suicide was the answer. It was not; the attempt failed. When Tien awoke the next day he took it as a sign, committed from then on to transform his struggle into something else. The next several years of spiritual and personal development changed his view of life from someone oppressed to someone full of joy who loves life. This transformation gives Tien unique insight and facility when teaching people how to tap into their own capacity for freedom, choice and connectedness. One of Tien’s biggest accomplishments was being the first Asian bi-gendered transman to transition publicly during a time when LGBTQ awareness was rare (Vancouver, BC Canada2002). Tien’s Transcending Gender curriculum includes Upgrade Your Gender IQ and Gender Conscious Parenting. He also teaches Race and Spirituality Programs, and Mindfulness Programs. Watch – https://bit.ly/30MmFq3